"You ran a marathon with a cold, on prednisone, coughing the whole way, and you came close to your best marathon time when your breathing is currently at 49%?  I do not know how to do it."

Those were the words of my asthma doctor this morning.  And it summarizes the race in one paragraph.  I went, I ran, I conquered, I didn't PR.  But considering all of that, I think a 4:47 was great and that I did a'right.

Long:
Yesterday, I ran the Marine Corps Marathon in DC.  What an awesome race!  It's another big marathon and the Marines knows how to put on a great race.

After Berlin, I was looking forward to see what I could do when not having asthma issues during a race.  Unfortunately, after I got back from vacation, my dad came for a visit sick as a dog.  Having just ran a HM in the rain the day I saw him, I caught his cold.  That was two weeks post marathon so I don't think the marathon and the subsequent reduction on my defenses had anything to do with it, but the HM was in the pouring rain and I think that was key.

By Monday two weeks ago, I started feeling blah.  Two Thursdays ago I shut down all running until Monday to get better.  Everything worked out but the lingering cough remained.  The doctor prescribed prednisone on Thursday to help me deal with the marathon and off we flew Friday night, leaving the hurricane down here and hoping to evade the hurricane up there.

For the four days prior to the race I was getting coughing attacks every often (especially at night).  That was the only thing that worried me because I cannot run and cough (have not mastered that yet).  Still, felt strong, energetic, and ready to run.

Pre-Race:
There were a ton of forumites heading that way, between the Marathon Dailies, the MCM forumites, the BF, and the Maniacs, I had close to 5 different lunches and dinners to choose from.  Unfortunately, DH traveled with me and we had a very short time to enjoy the city before we had to fly back home.  So, I ended up going to none, bah!

I was lucky to meet silver_springs77 while I was coming out of the expo.  We tried to time it and we couldn't meet so I jokinly told her I would see her at the metro station and there she was!  Then, again, we saw each other at the WWII Memorial.  Score!

I picked sdnyc's (Angela) packet and got to meet her, DH, and her DD in person, so score again!  She is so nice and (dang it) skinny, so our picture looks kind of loopsided (her way since she looks so tiny while I look like a whale).

So, Angela and I met the morning of the racer and headed to the shuttles.  And so 1000s of others.  It took us close to one hour to make it to the athlete's village so I missed all the pics.  We headed to the potties and spent the next 30 minutes there.  This is now tradition for me, missing the start while in the potty = great race.  Got it.  I'll try to do the same from now on.

We head to the start and made it with thousands of others still waiting.  We parted ways and started.  This is us:

Since I needed some Bad Assness in me, I decided to wear this:

Race:
The first half of the race is hilly.  Up and down and up and down.  They changed the course somewhat but I don't recall where is the change.  All I know is that one mile was all downhill and I was flying at an easy HR it was fun.  I saw 8:30mm.  Maybe I need to find some downhill races to BQ....

I was coughing since we started.  Cough here, cough there, but at Mile 10, I had the first coughing attack.  I had to stop and use the inhaler.  It was a bad one but I quieted down and continued on.

At mile 8 I passed bingo_jenn.  She was doing great (she passed me at Mile 23 en route to a PR, but I'll let her tell her own tale).  We said hi and parted ways!

I crossed the halfway point at 2:18:XX according to my Garmin, so I knew I was running slightly slower than Berlin, but hey, let's face it, Berlin is flat.  MCM is not.  I was running well except for the coughing and I felt strong.

At Mile 20ish, I saw Angela again when she passed me and we ran side by side to each other for a while.  At Mile 21, I stopped to fix my sock and got a massive coughing attack, so I used the inhaler again and promised myself I would wind down the pace if the coughing go worse.

At Mile 23, I get another whooping coughing attack, so I turned off the turbo and decide to cruise to the finish.  At this time, I'm close to Berlin still at 4:39 (according to my Garmin, maybe I was mistaken, who knows), but I didn't want to push the asthma to the extreme.  It is more important for me to run with no asthma attacks than to PR.  So, I shut it down.

At Mile 23 just as I shut it down, I saw a beer station.  Me with my Will Run For Beer hat, took a beer and drank.  Next came the Dunkin Donut station so I ate some donuts too.  I kept running but easy pace, so as not to disturb the lungs more.  I saw some fellow Manics walking on the course and one of them looked like she was not doing so well, so I walked with her for a bit and got her running again.  She passed me and never saw her again.

Mile 24-25 is where the last uphills start and I took it easy.  The volunteers were great at this point and the spectators made the last three miles awesome.

When we got to the Iwo Jima monument, the HILL came in.  I have run it before when I was in DC and ran with rpflash and I knew it was a bad one, but I had forgotten how bad it is.  It feels like you're using one of those stair masters and are hiking on a vertical hill.  I wanted to walk it but I didn't.  But I'm sure the pace was not fast.

And I finished!  And got a coughing attack.  The first Marine that saw me asked me: ma'm are you OK?  Do you need the medical tent?  Thanks, I'm fine.  And thanks for caring!

I got my medal, which is awesome!  See here: 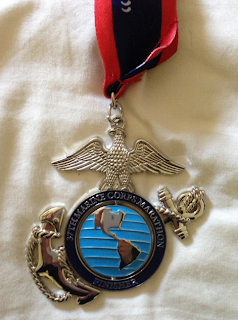 Met my husband and got back to the hotel for my flight back to Miami.  My stay there was short, but I had tons of fun.  Hoping to FE with people next time, though.

I managed to meet Jenn post race and she was celebrating her PR:

One regret from the race was that I threw a full cup of Gatorade on the Marine volunteer that had given it to me.  I apologized somewhere like 20 times before I resumed running.  Oops.