November 04, 2013
So, I signed up for the NYCM lottery for my third time, thinking I would never get in with a lot of people left out in 2012 due to Hurricane Sandy. This was my third try at NYCM and the second time I got in.  Both times I've gotten in have been in years I really didn't want to get selected, so, I've come to a decision that in order to get into NY, you really must be meh about it.

Once I got in and was $270 or whatever poorer, I told hubby we had to go, right?  Since he does not want me to do any more big races unless they have a HM with it, I looked for a race and we found the Dash to the Finish 5K, and I registered both of us.  That mollified him a little.  Still, he said, NO MORE MCM OR NYCM.  Sure.  Except I signed up to get a free guaranteed entry to be announced tomorrow.  I have come to the conclusion that since I don't really expect to win, I will probably win it.  Stay tuned.

We arrived to NY on Thursday night, after 10pm.  Took a shuttle to Grand Central and checked in at our hotel, the Roosevelt Hotel.  It was an old, but classic hotel.  It was the first time I have stayed at a historical/classic hotel in the US, so it was nice.  It was a mild 65F on Thursday, weird to think the race would be in the 40s.

We went to the expo on Friday morning, met Dahlia (lilflute86) for a bit and Seth from the Mizuno booth (he posts in the main forums as our Mizuno rep).

She accompanied us throughout most of the expo, but she had plans and we let her go.  Hubby finally bought a pair of Hokas (woot) and we were off (after buying more shit there) to lunch.  Burgers and beer.  Best lunch ever.

We continued touring as much as we could of NY, ending at Times Square.  It was a tad windy, as shown by my hair.  Still, the high for that day was 70F.  Still 20F colder than Florida.  By the time these pics were taken, it was in the low 60s, don't judge!  At least I'm not the one in a parka like the girl near me.

Saturday morning found us getting ready for the Dash to the Finish 5K.  It was 58F at the start and sunny.  I ordered the pictures but have not received the final versions yet.  I love these pictures.  I have never raced a race with hubby so crossing the finish line with him was great:

After the race, we spent the rest of the day sightseeing, spending time in Chinatown before meeting lilac_jive and AprilRunner for lunch.  Both were as wonderful in real life as they appear online.  We had a blast.  Here is a picture of our FE:

The rest of the day went by pretty quickly and we ended up having dinner at a British Pub near the hotel, the Cock & Bull.  Hubby said that every time he takes me to NY, all I want is Cock, haha.  We went to bed at 11pm, so I slept a good 7 hours, unheard of from me.

Woke up at 6am and headed to Starbucks to get my breakfast and the subway.  I arrived at the Ferry at 7am but missed the 7:15 ferry because it was too full.  Took the 7:30am ferry and had so much fun going in, you can see it in my face.

Arrived at the athlete's village at 9am (1.5 hours after I started the ferry trip) and went immediately to the restrooms, where the photographer from Marathonfoto wanted my picture (because a picture of you at the potta potty line is what's in, ha): 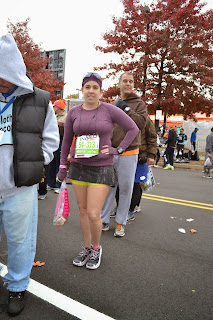 My corral was opened at 10am instead of 9:40 and closed 10 minutes thereafter.  We barely had time to go to the potty before they closed them and were ready to start.  This is a well organized race so apart from that, we had no issues.  I was in Wave 3 and started at 10:30am.  I was freezing most of the race including at the athlete's village.  But I LOVED IT!

Miles 6-10: I continue settling into a pace that feels easy and under my MP heart rate.  I felt good here.  I was really focused and you can tell from the paces and the pictures: 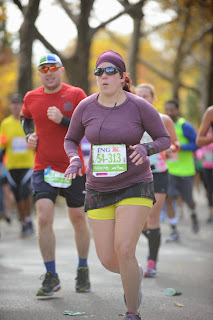 Miles 11-13: At this point, I am starting to feel the pain, so I continue at a pace that I know will not give me extreme pain.  I know I will have to slow down and walk soon when the pain gets too extreme but for now, I want to cover as much ground as possible.  We crossed the Pulaski Bridge at Mile 13.1 and that was the end of my fast paces: 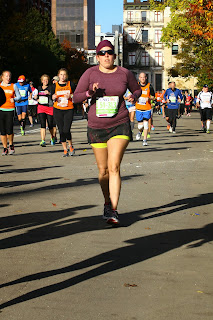 Miles 13-16:  Last time I did NY, I had an asthma attack on the Queensboro Bridge.  A fellow forumite told me she understood why, as she felt the air quality on that bridge lacking.  I felt stronger this time around but I decided to walk the uphill of the bridge so as not to get an asthma attack.  The air quality there was really bad, so I am glad I didn't push there.  Paces: 11:39 (stop to fix sock), 11:39 (aid station stop for vaseline), 12:04 (start of Queensboro), 14:19 (walk up the bridge).  This is me at the end of the bridge.  I guess the guy behind was having more fun than me, ha: 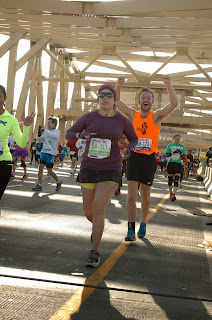 I really, really, REALLY, hate that bridge.  I was struggling to breathe in this picture but once I got fresh air, it went away.

Miles 21-23.  Harlem was my favorite section.  At this point, my iPod died and the only ear that had the music was able to hear the party at Harlem in full force.  We didn't get to experience that much of Harlem but they sure make up for the lack of miles there.  I stopped to fix my sock one more time and this weird guy gave me his apartment number in case I wanted a foot massage.  OK....

This is how Harlem does it: 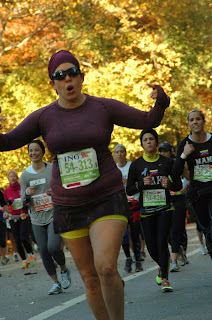 I came in at 5:14:XX.  Not my best by any means (almost an hour off) but with this stupid pain that does not go away, it was the best I could handle.  After I finished, I was herded like cattle to the section for the Early Exit, WHICH WAS A MILE AWAY!, got my poncho 30 MINUTES AFTER I FINISHED and met my husband.  This poncho was like a coat.  Very thick and nice.  AND ORANGE.  I want to wear it 24/7.  But the only thing I could think of was that I was grateful this was the EARLY exit!

I am not sore today so I know I wasn't even pushing, but I had a lot of fun.

I just hope my next tests can have an answer for this pain.  I am tired of having to run around it, so to speak.