Space Coast Marathon RR: A Huge Course PR, a Huge Side Stitch, and a great fun was had! (Long)

November 30, 2014
Today, I ran the Space Coast Marathon in Cocoa, Florida.  We are doing this race five years in a row to get some humongous medal at the end.  It is also a small but fun race that has a great 7 hour time limit for the full, free food, and free all you can drink beer (which only my husband enjoys because by the time I am done, I am DONE!)

At the beginning of this year, I wanted this race to be my goal race for the year.  Then, I got into Chicago and thought I could use Chicago as a gauge and then treat this one as the goal for the year to see how fast I was then after surgery and the whole shitload of asthma I had for most of the year.  Unfortunately, there were several events that prevented me from reaching that goal (although I did attempt it nonetheless).

First, as you all know (or at least the Dailies knew), I had to DNF the New York City Marathon due to an asthma attack at Mile 8.  The 40mph gusts of wind, the debris, and the horrid weather that day turned my allergy to dust and basically air to levels I had not experienced since my anaphylactic attack at the RnR Las Vegas Marathon 2012.  After New York, I tried to get back into running but I couldn't breathe.  I was having trouble even running 1-2 miles before my HR would shoot up and I would be hyperventilating.  The feeling did not go away while at home or at work.  So something else was going on.  We were by November 15 when I found the answer: I had a bookcase at work that had mold.  Maybe it was a placebo effect but when that shit was removed from my office, I was able to breathe again.  I even started to run well and more than I had before then.  I even ran 47 miles last week.  But by then it was too late to prepare for Space Coast.

Second, two weeks ago, on my LR (what was supposed to be a 15-16 miler), I fell hard.  On the road.  Near construction.  In the dark.  During rush hour.  I bet someone is still laughing.  I hit my knee hard.  Fortunately, although it hurt like a motherfucker, it did not give me problems while running.  But I had to cut the only LR I had planned before the race to only 9.60 miles.  I knew I had enough endurance from my Chicago training, but I was starting to get worried.

Then, last Wednesday I set out to run to Pilates and came back from Pilates, running a total of 15 miles that day, with the last 5 at MP + 10%.  It gave me hope that I could at least finish.  And then, I fell again this Wednesday.

Same leg!  There was a electric or communications cable hanging down from a pole and I managed to stick one foot in the middle of the circle and fell.  At least I rolled into grass.  So, it was not my fault...this time!

With that said, and with 7lbs less than what I weighed at Chicago (most of the loss in the last 10 days), I set out to Cocoa to run the race.  I was planning on wearing an R2D2 outfit and just run it slowly.  But, on Friday, against all indications that I should race it, I picked a racing outfit (you know which one, the one you would wear if you want to run fast).  So, I was racing it in some shape or other.

I did not carboload for this race.  The only carboload I did was yesterday: Pancakes and OJ for breakfast, G and a banana, a huge mofongo for lunch, and a chicken sandwich with sweet potato fries for dinner.  That's it!  Oh, and the two donuts I had for breakfast on race day with my favorite soda, which Jerry still has in his home from trying to give me one during Chicago.

One thing we were trying for me was 50mg of Prednisone the night before the race.  That's a big dose but one pill every 1-2 months should be OK.  It was supposed to help with my asthma.  But I woke up coughing and did not notice a difference.  Yet, like the doctor says, if you had not taken it, you would've.  Except for the awful stomach pain I had, it worked fine!

The HM started at 6am and hubby was running it, so I dropped him off at the starting line and said goodbye so I could use the toilet before I die.  The marathon started at 6:30am, and on time.  It was 60F and 57DP, or what we call in Miami, severe Winter weather.  I was wearing this: 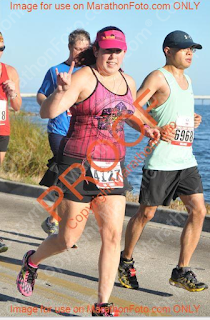 For some reason, there were people wearing LSs, black ones...in Florida.

I worried about them.

We started off and immediately noticed my HR was super high.  At least 20bpms than normal.  It was either the Prednisone or the Mtn Dew; not sure, but more experimentation will reveal the answer.  So, I race by HR and this was concerning, mostly because I did not know if the HR I was running at was reasonable since it was at least 5-10bpms than my normal marathon pace HR.  But, the first miles went on a good pace and I felt fine, so I assumed I was OK or at least underperforming, which was good.

And then, I noticed, I had LEFT MY SUNGLASSES AT THE HOTEL.  On a sunny race with at least 13 miles looking at the fucking sun.  I was pleased, not.

This is me around that time (waiting for all pictures to come out and purchase them): 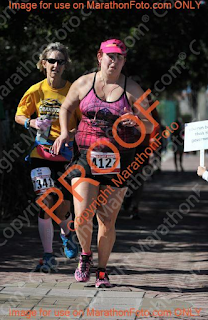 I came in at 4:53:23, 10 minutes slower in the second half, but a very strong second fast marathon post surgery.  This is a 17 minute course PR (I finished last year in 5:10ish).  I think I can break my Chicago time and work back to my PR times soon.  I felt ready to do it even with my lack of running lately (and no speedwork since Chicago).  I was actually surprised I was able to pull a time like this today. 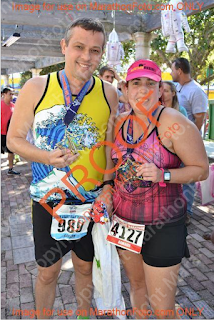