February 16, 2015
Yesterday, I ran the A1A Ft. Lauderdale Half Marathon as a training run in preparation for the Paris Marathon in April.  I am on Week 5 of training and it has been going really well, mostly because of the rare "Winter" down here, making my asthma nonexistent and capable of doing faster workouts than in prior cycles.  So, this race came at the right moment to be able to gauge where I am going.  I was not to race it, but needed to do 5 miles easy and the last 8 at MP (by heart rate).

I had a cutback week this week, but work and life had me shuffling every run all week.  I didn't run any of my runs on the days I was supposed to (except for the race) and, on top of that, I woke up on Saturday with a horrible migraine that didn't leave until I fell asleep on Saturday night and made me miss my 5 miler then.  Suffice it to say, that I was afraid to wake up on Sunday at 4am to get ready for the race with a migraine.  Fortunately, it was over by then.

Hubby was also running this race as his 12th in 12 months to get another moon on the Half Fanatics.  He was not looking to PR and, although his miles have gone up, his pace has gone down as he builds back from the illness we both got in November/December that made him miss a bunch of his training.  Overall, he did well, finished feeling great, and with no issues.

Temps were going to be awesome, 48F at the start, 50F at my finish, no wind (which is rare for this race).  So, instead of me fighting with 20mph as I did on my PR marathon race (this same course), it was 6mph and calm.  You couldn't ask for better weather to race.  Except I was not going to race.

We got there at 5am and I ate my KK glazed donut and drank my Mtn Dew.  The last 4 races have shown that eating these two things makes me run better so why not keep doing what works?  We finally found parking, got to the potties and were ready to go.  I decided to wear that bolero thingy (I think it's called a sharmer), together with my Phoenix INKnBURN camisole, and to wrap the sharmer around my waist once it was too warm for me to wear it (I took it off by Mile 0.50 but I was glad to have it for the start).  My husband felt a bit cold so he wore a long sleeve (I think he is getting a cold because that's not his usual self).

As soon as I turned on my TomTom, I noticed that my HR was at least 20bpms higher than normal (while resting).  Those migraine pills sure pack a lot of caffeine!  So again, just like during Space Coast, I had to make the decision of whether to run slower taking into consideration the stupid high HR or just assume the HR was 10bpms higher and run at 10-15+bpms than I had planned.  After the first few easy miles had me running at MP heart rate, I decided to assume that was my "normal" easy HR for that day and went with it.

I know this course by heart, having run this race every year but last year (due to surgery the day before), so I knew the first 5 miles would take us from downtown Ft. Lauderdale (and the federal court I practice at) to Las Olas Boulevard, hitting the sunrise at the beach on the A1A by Mile 3 and into a park with a nice path at Mile 4.  By mile 5 I was ready to push to my MP "heartrate" but Miles 4-6 are a bit crowded due to the narrow path.  I still had no problem accelerating and from this point on, only 1-2 people passed me throughout the race.  I passed everybody I had in front of me until the finish.  I took a gel at Mile 4.50.

I finished and felt really good.  Waited for hubby to finish, got a few selfies with the awesome medal (my hair is up on end because the wind was high by then): 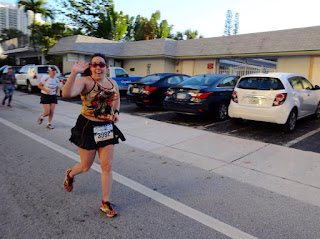 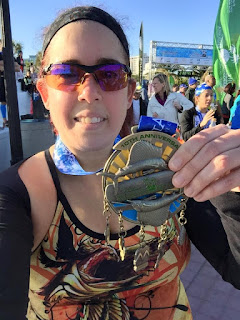 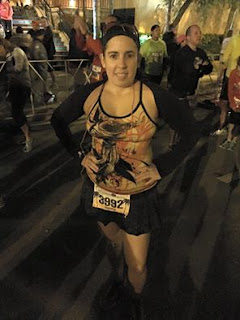 And took some pics of hubby coming in: 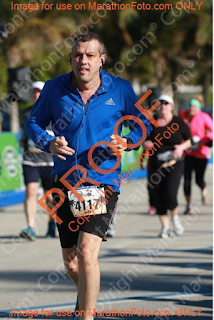 Overall, I felt really good with this workout.  My goal was to beat my other workout training HM, the 13.1 Boston, where I did 5 at MP and 3 fast and ended up running 2:17.  I really thought I could beat 2:15, but never in my life did I think I would finish with a 2:10 on a training run.  It's been a while since I have been able to run this fast without having an asthma attack.  I really don't want Spring to come and with it, my lung capacity to lower down dramatically, but maybe before that happens I can get my marathon PR back.  We'll see.

This is my last "race" before Paris.  All I have left is the PR Half Marathon and I am running with hubby, so only tempo runs and MP runs will tell whether I can finally run what my legs can run but my lungs cannot.  But this is very promising.