June 02, 2015
On Sunday, I ran the RnR San Diego Marathon.  This was to be my backup marathon if Paris failed to give me the results I wanted but a lot happened between Paris and this race to made me change my mind.  I ran it for fun but still running a strong race, finishing in 4:46:32 on a hilly course.  Very happy with that.

So, as you know, I ran the Paris Marathon after a great training cycle, hoping for a huge PR.  In the end, I ran it with what ended up being high BP (my readings were at the 158/90 to 165-95 ratio), a migraine from the BP, and an asthma attack.  So, coming in at 2 seconds from my PR was really good.  Yet, I was disappointed.  Once again, the asthma stroke after months of not even being an issue.  But, marathons are like that because, well, MARATHON.

Anyway, I used the week post marathon to recover, running low miles and getting back on the horse soon thereafter.  My training for the 5 weeks after Paris went really well, except that (1) I had to run all my LRs but one on the TM, (2) ran all my MP runs on the TM, and (3) got sick for 3 of the 5 weeks.  I am still congested from the cold from hell I got 4 weeks ago and that was a factor in my decision (last minute) of not racing on Sunday.  I ran a 70 mile week, and two or three weeks in the 50-60 ratio.  I felt fine going in.  However, I had no mental mojo to race it.

Remember the high BP?  Well, I started BP meds one week after Paris and I feel so much better.  Damn parents and their hereditary diseases.  Anyway, this was to be my first marathon with these meds so I also did not want to risk the chance of another big issue like in Paris, so this played with my mind.

We arrived in LA on Friday at 11pm.  We drove to San Diego on Saturday and I really liked this trip because it gave me time to relax, find a KK and buy some Mtn Dew. :-)  It also gave me time to unwind from the stress of work and to relax before the race, since we usually travel the day before the race.  We stayed in front of the convention center where the expo was being held and right across from Petco Park, where the Padres were playing the night before the race.

We woke up at 4:30am, and immediately I had stomach issues.  I had a couple of more issues before the start but it never bothered me during the race.  We were lined up for the humongous line for the buses by 5:15am and I seriously thought I would not make it before 6:15am, my start.  The rules are very strict in that if you are not there by the time of the start, you are forced into the HM which is a whole different course.  But we made it by 5:45am, after which I spent the rest of the time in the potty lines or inside the potties.  I went into my corral while they were singing the National Anthem. 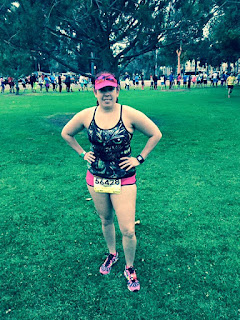 Before the start, they mentioned the 92 year old runner that was trying to beat the world record for oldest female marathoner and I am glad to hear she did.  I did not hear any mention of Meb but since he was racing the HM and the HM did not start until 6:50am, I assumed he was mentioned there.  I started around 4 minutes after the start.  Temperature was 61-70F during the race, cloudy for most of the race.  Good because the course had no shade.

Miles 1-5:  As usual, I started slowly and decided to just keep my HR at 155 for the flats (there were hardly any), 150 for the downhills (there were a lot), and no more than 160 for the uphills (which were more than all the others combined).  However, my HR was abnormally up.  Between the stomach issues and my chest congestion, it was not a surprise.  But I usually just adjust it upward; this time I just didn't think it was appropriate.  I wanted a strong race, not a risky asthmatic marathon, so I refrained.

Since the first few miles were "downhill" (more on that later), I did not want to wreck my quads, especially since I have zero uphills and downhills where I live (my routes define the word flat by being 0ft elevation).  By then, I had decided not to race it and just to run somewhere between easy pace and MP, as I knew the second half was a doozy and had a 1.5 mile uphill that could kill any chances of you ever seeing your quads again.  For the first 13 miles, I achieved my goal. Miles 2-3 had some downhills so that's why I look like I am achieving GMP but not really.  Paces: 10:19, 10:03, 9:53, 9:38, 9:54.

Miles 14 - 20: At this point, I put the HR goals out the window and just ran each mile until the HILL as nice and somewhat uncomfortable as I could.  Usually, by Mile 14, I am struggling to quit, walk, do something, other than run, so I usually put my best songs during this period.  But I didn't need to.  I was having fun, running a marathon just for the heck of it, high fiving kids, men, women, just enjoying the moment.  I crossed Mile 20 and headed to the big HILL knowing I would have to walk then at some point but just doing my best at that point.  I did have to fix my socks every 3-4 miles which irked me but it had to be done, as usual.  There is nothing I can do with an unmoving toe at this point. Rolling hills and more hills but still running them all the way.  Paces: 10:24, 10:38, 10:30, 10:41, 10:52, 11:41 (sock fixing), 10:51.

Miles 21-23: Behold, the HILL.  We were on the highway and they were not kidding when they said it was going to be long.  Around 1.5 miles long.  When they said this was not a PR course, they meant it.  I started running the hill but after 0.50 mile I was not making much time anyway, so I ran/walk until I reached the crest.  I was probably as fast as I was just running but at least I tired myself less.  There were people walking left and right.  It felt like it had no ending.  Paces: 11:37, 13:57 (LOL, but it included a top to fix my sock, so), 11:16.

Miles 24-26.2: At this point, I am still running strong and, although my best songs are coming out of my ears, I don't feel tired nor wishing it to be over.  I am not even looking at my watch so I have no idea where my HR is at but it's above 160 at this point. No asthma issues at this point.  Although the course is supposedly downhill until the end, I didn't see it.  It was rolling hills and uphills with a downhill last 0.50 mile to finish.  Someone had a sense of humor, ha. Paces: 13:13 (sock fixing), 1109, 11:37, 11:01.  I finished with hardly anyone around me and my husband took this picture: 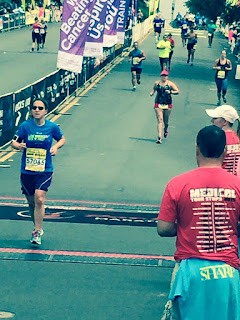 Not sure what focus he was using because this resolution sucks, but I think he was zooming?

Here is me with at the finish.  Not sure if you can tell but I am soaking wet: 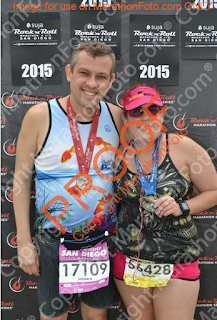 Overall, I am happy I ran this the way I did.  I didn't give it my all and it is my fastest hilly race ever, so I cannot complain.  I really didn't want to push it on Sunday and I'm happy I did not.  Still dealing with chest congestion and getting used to the new meds, so this was a success in my book.