November 30, 2015
After Las Vegas, I didn't want to write an RR because there was not much to say but that it sucked, I couldn't breathe, and I said fuck this shit out loud and stopped.  The pictures tell the tale.  But anyway, let me write it down a bit for consistency purposes.  Short Version: It sucked.

After Chicago, I decided to give the RnR Las Vegas Marathon I had on the calendar a chance.  I had already ran Las Vegas in 2012, had an anaphylactic asthma attack at Mile 9 and went on to run/walk to finish (I don't recall ever DNFing a race before then but knowing now what I knew then, I should've done that).  Time was not my worse, but it was something like 5:14-5:32 (I don't recall; that's how miserable it was that I got amnesia).  So, I wanted to run it again since hubby wanted to do the HM and I wanted revenge on the course.  I mean, what could go run in 20mph winds and dust, which I'm lethally allergic to?  Seriously, I thought it would go better after 4 years of allergy shots and stronger lungs.  But I digress.

We arrived in Las Vegas on Saturday, picked our car and went to meet Katrina (fellow RWOL member), her husband and cute baby, for lunch.  We had a great time (I had met Katrina in 2012 but never got to take a picture to prove of such FE, so we resolved that issue immediately): 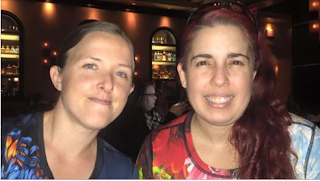 My only regret was that we couldn't spend more time with them as we had a show to go to.  Since the race on Sunday night, we had all the time to relax, drink, eat, and watch something.  Woke up on Sunday feeling good, except for some coughing due to the dust in the area.  Weather was gorgeous and I seriously think the race would've gone better for me had it been in the morning, since the winds were at 4mph and feels like 53F.

We walked a bit and went to some of the hotels, rode the NY NY roller coaster, and ended up having lunch but for the life of me I don't recall where.  Went back to the hotel to chill out and waited until 3pm to leave.  We had to take the little train to the MGM (we stayed at the Bally's this time around), then walked from the MGM to the start, which was approximately 1 mile.  The train or however it's called was a nightmare.  Every single one that came by was full and we needed to push to allow 3-5 people to enter.  We managed to enter on the third trip.    We made it to the starting area, all while listening to Kid Rock who was having a free show there for the race between 3pm and 4pm.  Temps were still good (low 60s feeling like high 50s, but the wind was already bad).

The corrals, as Lurch explained, were a nightmare.  That is not typical of the RnR races I have done (6 so far).  My corral was 19, and hubby's was 29 or something like that.  When we get to mine, there were people from the 43rd and 33rd corrals.  So, we decided to move forward, as I knew I was not with my 19th corral.  I ended up in Corral 11 with people from the 20th corral.  Hubby stayed a bit behind but close by.  We took our pics, I ate my donuts, and we were off.  The wind was high by then but I didn't notice before starting because I was covered by a mass of people.

Starting pic (Call it the before) - I still have not bought the pics but I will as they were actually pretty good: 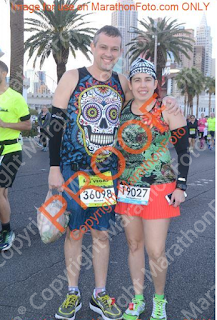 As soon as I started, I started having issues.  The wind was super strong from the side and I soon saw someone falling due to his foot touching either someone else's or his own while trying to run.  I had to use my head buff over my face immediately.  I felt so miserable, I immediately had regretting doing this race.  I remember the split was somewhere in the 10:30s, which was easy pace, but it felt like I was swimming against a bad surf and drowning.

Miles 2-3.1 didn't fare better. I started getting into my GMP but it still felt like I couldn't breathe.  All I wanted was to get past the New York New York hotel to be able to get some relief from this cyclone, LOL.  When I finally did, I started having some good miles and paces between the 5K and the 10K.  My HR went back to normal and I was able to enjoy it a bit.  It even drizzled and I thought, hmmm, maybe this will not go bad.

Then, I passed Mile 7.  We headed into some suburbs and I think the wind was back in force; if not, it was the dust.  I couldn't even breathe by then.  I felt like a truck had run over me and my eyes were swollen from the dust that fell into them.  Mile 8 was slower than mile 7.  Mile 9 was slower than Mile 8.  I can see the writing on the wall and all I could think of was: I have 17 more miles of this shit and the wind is worse outside the city where we run the last 13.  Do I want to go through this again?  A bit farther than I had my anaphylactic attack last time, I said fuck this shit out loud, stopped, and went to the side of the road.  Picked up my phone and called my husband who I assumed was around Mile 6.  He was actually at Mile 8.50 so I told him, OK, I'll wait for you here at Mile 9.50.  Pick me up and I'll see if I can run/walk with you to the finish line.  I seriously doubt I could but I was 4 miles away from our hotel and no way to get back so I thought that would be a good choice.  At this point, I didn't care if I had a medal, a finish time, nothing.  I didn't know the RD had given marathoners the choice of finishing the HM due to the wind and I didn't know there were reports of gusts in the 50mph range.  Ugh. No wonder.

So, I waited for 15 minutes until hubby caught up with me.  Medical passed me by (they have some runners that are part of the medics that run back and forth certain miles and make sure everybody is OK, I like that about RnR).  Told him I was fine, that the coughing was better and I guess he believed me because off he went.  After finding my husband, I started run/walking with him but he was way ahead of me most of time (told him to continue and don't mind me).  I felt a bit better by Mile 10 where we passed the marathon turn and I had to assure the staff, again, that I knew I was taking the HM route.

When we got back to the strip, the wind was horrible.  To the point, my husband was walking more than running.  I had my face covered still.  It was bad everywhere.  Saw two more people falling due to the wind, all the mile markers were on the floor, and everybody was running like the Hunchback from Las Vegas.  I just looked like I went to war with the wind and lost: 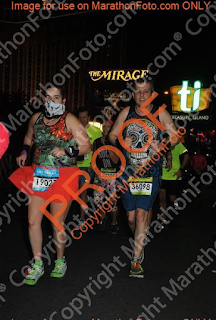 Especially besides that woman who is apparently having a great time.  LOL.

Hubby was on route to a PR but since it was so bad in the last 3 miles, he missed it.  Still, he ran 2:37, his best time in more than a year.  And I have to spoil it by saying, he PRd yesterday, and broke 2:30 again, which was his dream (he always thought his 2:29 was a fluke or a short course, or whatever).

I ended up very dejected after this race.  I still cannot breathe well which might have affected me yesterday, but I ended up seriously down.  I spent most of the week falling asleep everywhere.  Even though I kept my runs and everything, I felt tired.  You know, like this: 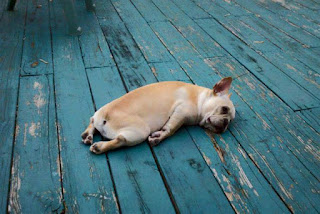 They did give me a medal and an official HM time.  Good!