November 11, 2017
Last Saturday, I ran the Indy Monumental Half Marathon with my husband.  Coming from two weekends of marathons, I thought it would be a nice break to run it with my husband and taking it easy.  We had a great trip and had a great time at the race, coming in two minutes slower than his HM PR from Seattle earlier this year.

I had run the Indy Marathon last year with my BFF Mary and we had a great time, but I had a tough time during the marathon with my asthma and my medication side effects (exhaustion, weight gain, etc.) that I did not have at all this year.  However, I did not want to run another marathon (well, I did, but mentally I needed a break) before Space Coast later this month, so taking it easy and running the half worked perfectly.

When we looked for flights to Indy, the flights were pretty expensive (contrary to last year), so we started looking for airports nearby.  We remembered that Fiona the Hippo was already a sensation at the Cincinnati Zoo, so we checked flights to Cincinnati and made plans to fly into Cincy and see Fiona.  I was really looking forward to it.

We got into Cincinnati/Kentucky International Airport at 11pm on Thursday night and drove a few miles to a Newport, KY, hotel (barely opened for a couple of months) with a view across the river into Cincinnati and stayed the night.  On Friday morning, we woke up too early (damn it, I can sleep well), so we got into the Newport Aquarium before heading to the Cincinnati Zoo to see our hippo baby.  I couldn't wait!

We arrived at the zoo around 11am, and the weather was conducive to the hippos being in the pool.  We saw the whole zoo as well, but the closer we got to Fiona, the more excited I was. Like Darla, you know, when she is told: piranha is a fish, just like your present... 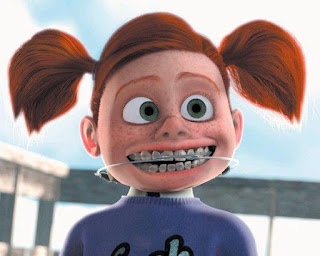 As we head into the hippo pool, we noticed this huge line of people and kids, which ended up being the Fiona line.  Normally, this is her at the Zoo, crashing a wedding proposal and being sassy as an internet sensation: 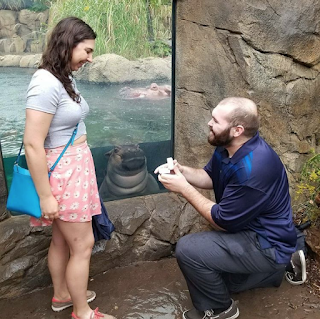 But, of course, she heard I was coming so she laid in the glass to sleep and didn't wake up until after I had left the zoo: 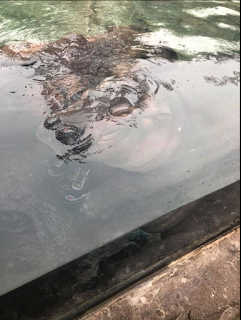 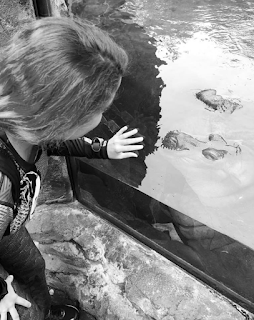 So, Miss Sassy Fiona was mostly a tired teenager that does not want to wake up and go to school, ha!  Still, I loved finally seeing her in person and the other animals at the zoo.  I really liked this zoo. 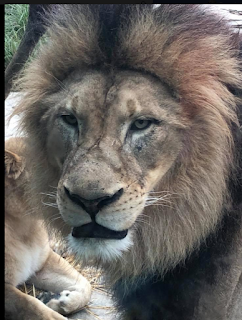 Man, the lions are so friendly, they get right in your face. :)  Fortunately, there was glass between us. Ha.

After the Zoo, we headed to Indianapolis, but not before finding a Mexican Restaurant somewhere in Ohio to have lunch.  We arrived at Indy after 3pm and headed straight to the hotel and later the zoo. This time, we stayed at the Hilton Indianapolis, which was right at the start line.  That worked much better than last year, since we had basically a 0.05 walk from the lobby to the start and we were able to sleep until an hour before the start, which is my preference.  Will definitely book this hotel next time.

After the expo, which is relatively small but nice, we met some of my friends from RWOL and the FB Sub-4 group (fortunately, they have not thrown me out due to lack of sub-4, LOL), for dinner: 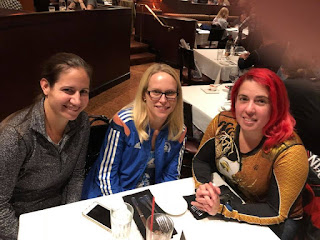 This time, Mary was running the marathon and I wasn't, so we planned on seeing each other at the start and say goodbye when we crossed the finish line.  It was nice to see her again, even though we text up a storm in between our once a year meetups, ha.  Here is us at the start line: 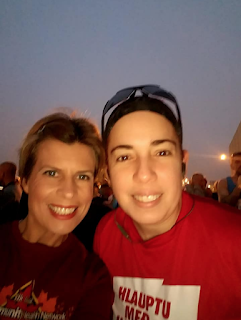 And we were off!  The weather was gorgeous, windchills in the low 40s for most of the race and cloudy.  There was hardly any wind and although the forecast said rain, it never happened.  I decided on a tank and arm warmers since I was running easy and I was glad I went that light.  The arm warmers got too warm during the race but by then they were stuck to my arms so I didn't touch them.

We were doing good after running the first mile easyish.  Still run/walking at his favorite of 6:1 and doing good.

I was looking for my friend Kathy, since we were unable to find each other in the corrals, so I was looking for a BB8 tech and she found us between the 5K and the 10K.  We took a quick selfie: 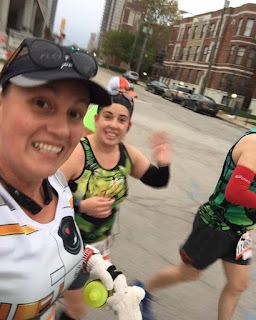 And we parted ways once again.  Later, when I saw the water station dressed as Star Wars characters, I knew she was going to enjoy that (and she did!).

At some point after Mile 10, his ITB started hurting so we slowed a bit.  But at Mile 11, he left me in the dust and I was like WTF.  I started chasing him for 0.50 mile but I was stopped to let an ambulance cross the street so I couldn't catch up to my husband (who is slower than me) until his next walk break.  He was on fire (and I assume he had ACDC's Thunderstruck on repeat, LOL).  I guess his ITB wasn't hurting now!

So for the next two miles, every time he ran, he would leave me in the dust and I would catch him during his walk break.  I was able to fully catch him at Mile 13 as we headed to the finish line and I did the usual Hell No! when he tries to catch ME, but he just speeded up like a bullet and beat me by 2 seconds.  FFS.  LOL.  We ended up running 2:27 something, which is one of his fastest halves, so he was happy.  Here are some pics of our adventure. 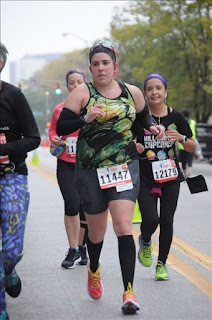 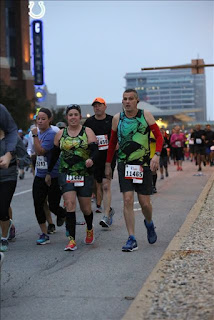 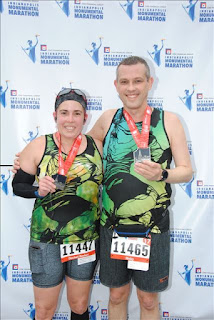 I really like this race.  The weather is normally cold enough for a marathon and it's what non-Miamians would call flat (it is not Miami flat, though). :)  We will return often and I will try either one of the races each time.  Worth running for sure!