January 11, 2018
Last Sunday, I ran the WDW Marathon.  This was supposed to be a race attempt at improving my post-knee surgery time and a good way to start 2017.  To the contrary, it ended up being a slug to the finish full of medical issues.  But still, it's Disney, so fun was had.

My last race for 2017 was the Weston Half Marathon, in which I ran a spectacular race and almost PRd.  So, the stakes for this race at Disney were high.  Especially, after the weather forecast turned to perfect.

Since Disney is semi-local, traveling is not as stressful as for other races.  We drove to Orlando on Friday afternoon and got to our Disney hotel (Port Orleans French Quarter), after dinner.  I had a horrible sleep week with me sleeping only 3-4 hours a week, so I was hoping Friday night was better.  It wasn't.  I woke up feeling run down and probably tired.  The weather was lovely for running, though, and also for walking around (the really cold weather had warmed up a bit).

After breakfast, we proceeded to the expo to pick my bib and to look around.  Managed to meet my friend Deb, so that made my day. :) 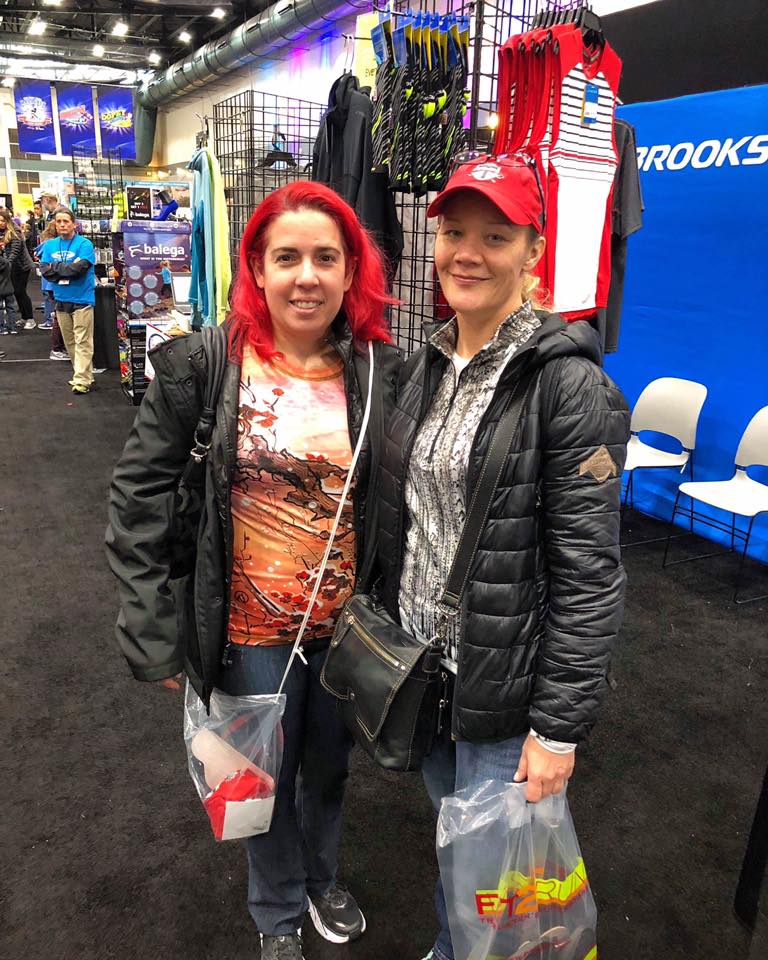 After the expo, we headed to the outlets to do a bit of shopping and then met my friends Alan and Mona and their respective SOs for dinner at the one of the Boardwalk hotels.

I knew going to bed earlier than usual was not going to happen, even if I was tired, so I went to bed at my standard for a 3am wake up call.

Race Day:
Woke up at 3am realizing I had slept probably 1-2 hours.  Couldn't fall asleep and woke up constantly.  Oh, well.  The feels like at that time was 36F and with a bit of wind, so I headed outside wearing my tank, arm warmers, and a thick sweat shirt I would take off at the start.  I wasn't too cold so it was perfect.

I got into one of the buses at the Port Orleans hotel and got to the athlete's village a little after 4am.  There was already a lot of traffic to get there compared to prior years, so I am glad I got on the first bus I saw rather than wait.

I met with fellow INB Alumni, Angi and later with Deb and we headed to the starting corral (Corral D).  Race started at 5:30am.

Miles 1-5:
The weather was awesome, albeit a bit breezy.  We run approximately 5-6 miles in the dark (at least from Corral D), so I was looking forward to see the castle in the dark.  The first few miles are all on the highway heading to the Magic Kingdom and, contrary to other years, I didn't see as much course entertainment as I had in the past.  In any event, I was not going to stop for pictures unless the race was going badly and at this point, it hadn't (but more of that later).  Splits: 10:14, 9:57, 10:01, 10:01, 10:05.

Miles 6-10:
After Mile 5, we entered the back of the Magic Kingdom and headed to the castle.  Although I had not started feeling bad here yet, the pictures tell their own story: 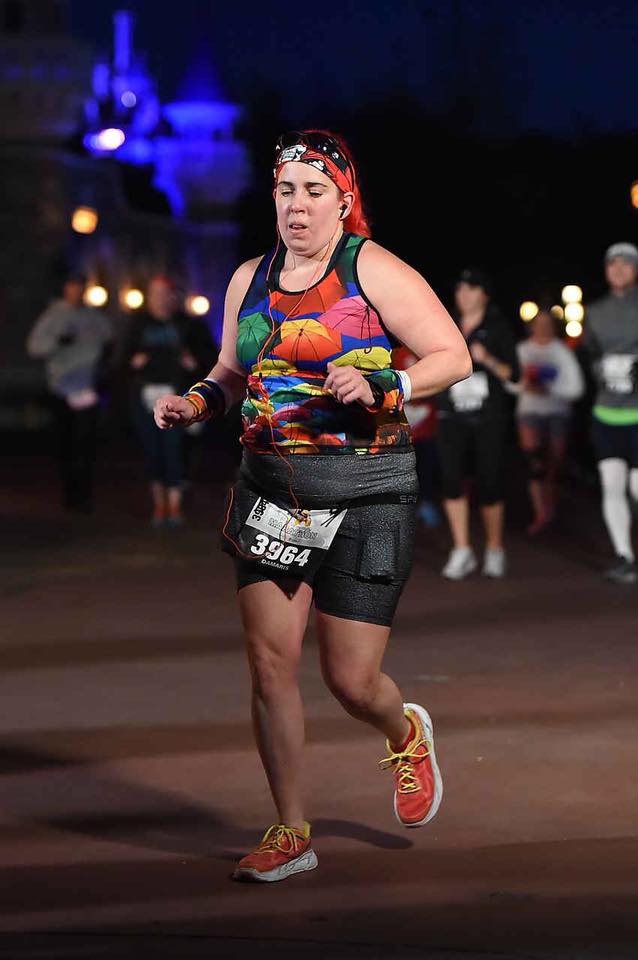 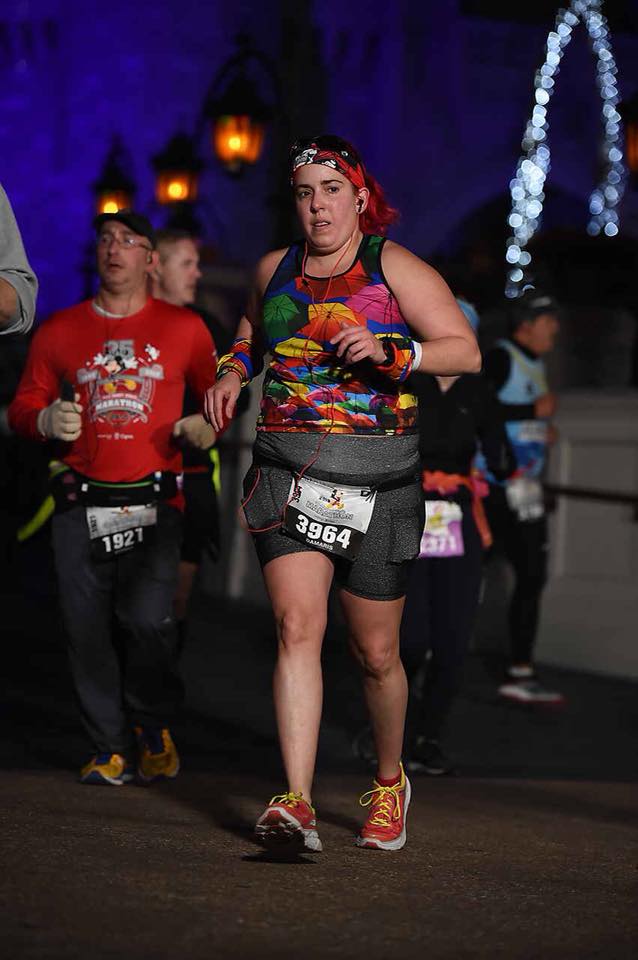 Miles 11-15:
After the Magic Kingdom, we head towards the water plant and head to Animal Kingdom.  I had been drinking water at all water stations but at one point I accidentally drank some horrid Nuun that I took from a volunteer in the dark.  That almost made me puke even before I puked.  The sun had come out and I felt OK, but my stomach started hating me.  At Mile 10, I stopped briefly and threw up on the side of the road.  Not surprising it was close to the water plant as that area always smells badly.  But I figured it was one and done so I continued running.  Until I entered Animal Kingdom, where I started feeling like shit and then I threw once more after the halfway mark.  Splits: 10:07, 10:09, 10:25, 12:48,10:40.

After the half way point, which I crossed at 2:16 or something like that, I walked for a while and texted my husband.  I was considering heading to the parking area and waiting for the park to open, hop on one of the buses and heading to the hotel.  But that was a good hour away.  Hubby took me off the ledge and told me to run/walk and see if I felt better. I continued on but I didn't run/walk. I just ran until I puked, and puked and ran, and puked some more.  I kept drinking water at the stations, but not sure if that helped or hurt me at that point.  I just wanted to be done.

A picture of me at the Animal Kingdom.  Don't I look like I'm having a good time? 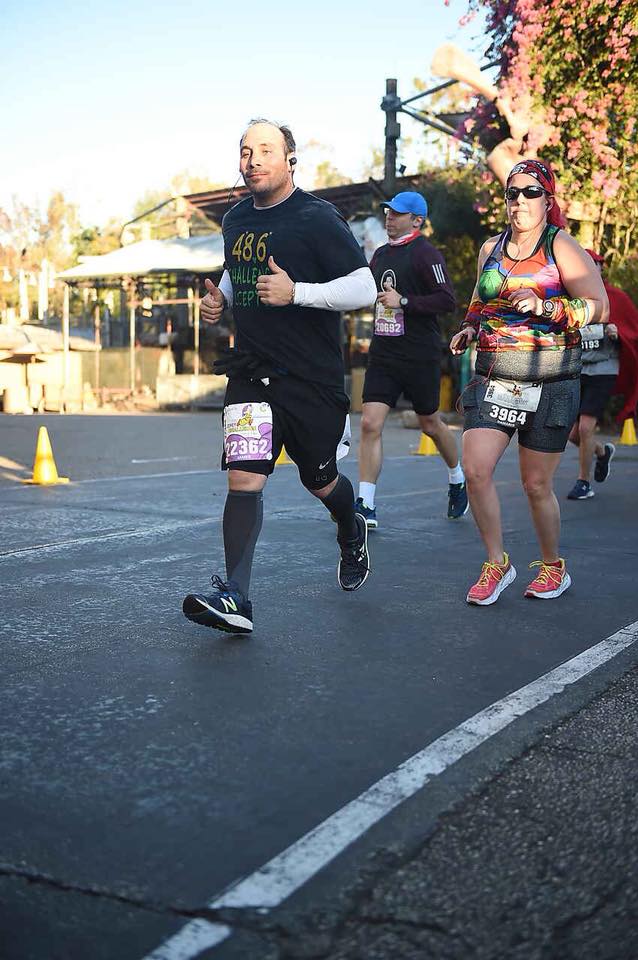 Miles 16-20:
After the Animal Kingdom, we head once again through the highways towards the ESPN complex.  Although people hate this area of the course, I normally love it. It shows me I'm at Mile 20 and ready to head towards the end of the race.  But this year, I just didn't like any of it.  The out and back that was added in exchange for the speedway that was taken down, to the ESPN track where I met my friend Mike and we talked a bit, to the stadium where my shoes got full of debris and I had to stop to fix them. On top of that, I threw up twice in this section.  But I couldn't believe I was still going.  At this point, it would have been impossible for me to just stop and head to the hotel, which is closer to Epcot.  It was the point of keep going or wait three hours for a bus or my husband.  Splits: 12:53, 11:02, 14:47, 11:24, 13:48.

I will let you know guess which ones included throwing up (Mile 18) and the debris removal at Mile 20.

OMG, It's Almost Over:
By Mile 21, my stomach finally felt better. No more puking after this.  But I was for sure done.  Exhausted.  Hating everything.  We headed to the "hill" that characterizes army men yelling at you to continue, demanding push ups, etc., but this year it was disappointing. Only one guy was there just pushing us to the end.  No Army guy demanding pushups and taking out pictures.  This year Disney character stops were for sure disappointing. I have run this race for many years, and this was the less fun on the course.  Splits: 13:48, 14:15, 11:28, 13:15, 13:32.

At this point, I stopped a lot because for some reason, I kept getting debris in my shoe, or maybe I was just hallucinating, ha. I was also texting my husband more often so I walked during those periods.

After I crossed Mile 25, I was wondering of Mexico was open (World Showcase) to buy a margarita, like I had done last time with Mary during the Dopey Challenge.  At that point, I had stopped throwing up, so I thought it would be a good risk to do so.  And lo and behold, I saw a bystander with a margarita and I asked her if it was opened and it was!  So, I stopped, ordered a mango margarita and then proceeded to the finish line.

Boy that margarita was popular. Bystanders were jealous, fellow runners were sad they didn't get one, a cop was directing us to the finish and he said, finish and get your wine, looked at me and exclaimed, someone has a head start.  Here is the pic of that moment: 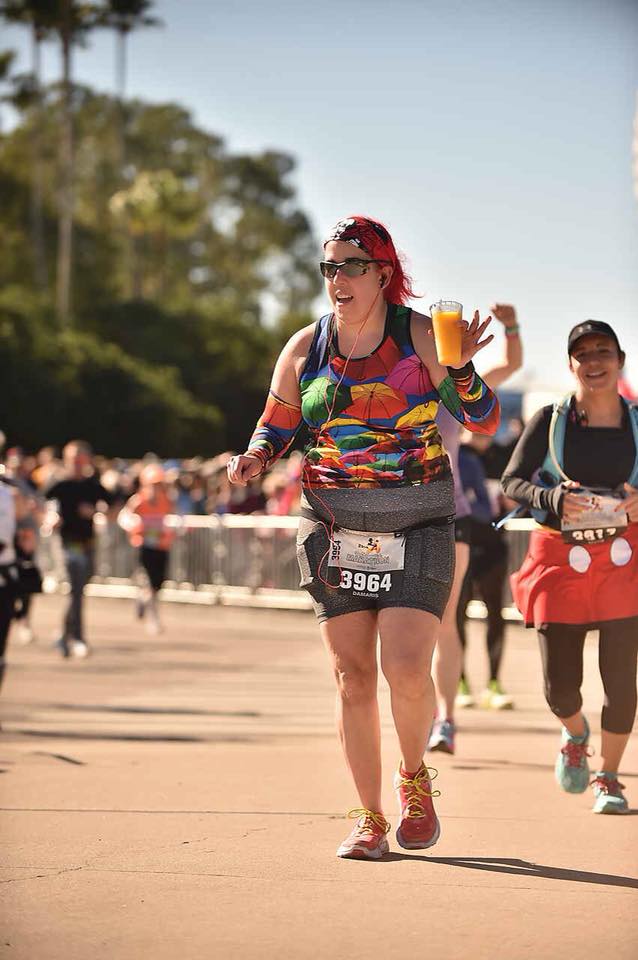 Then, I headed to the finish line chute and more people were talking about the margarita: 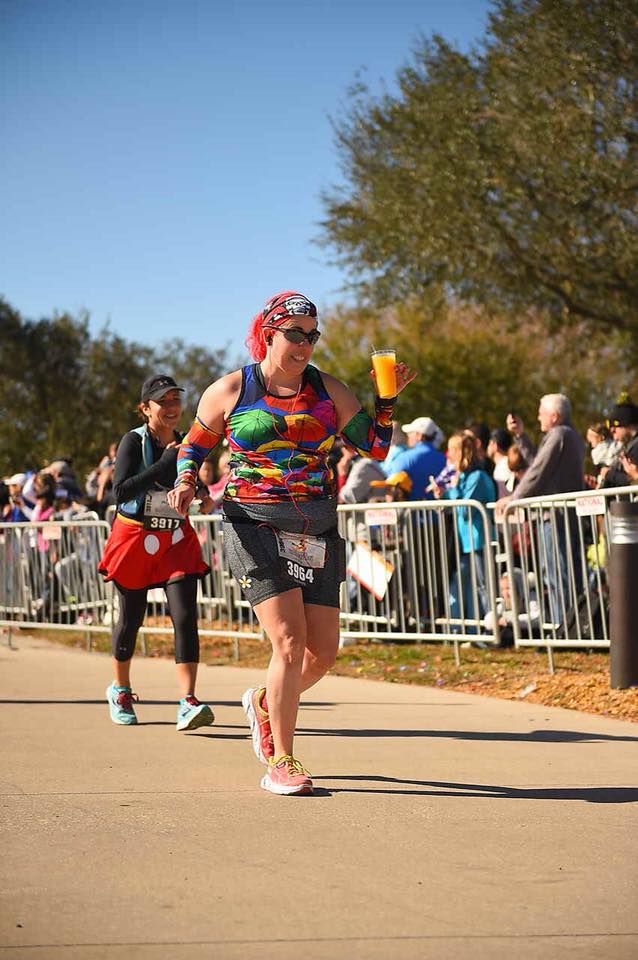 It was the slowest mile of the race since they took 5 minutes to make my margarita, but oh, it was worth it.  Crossing the finish line with one in hand is somewhat of a tradition: 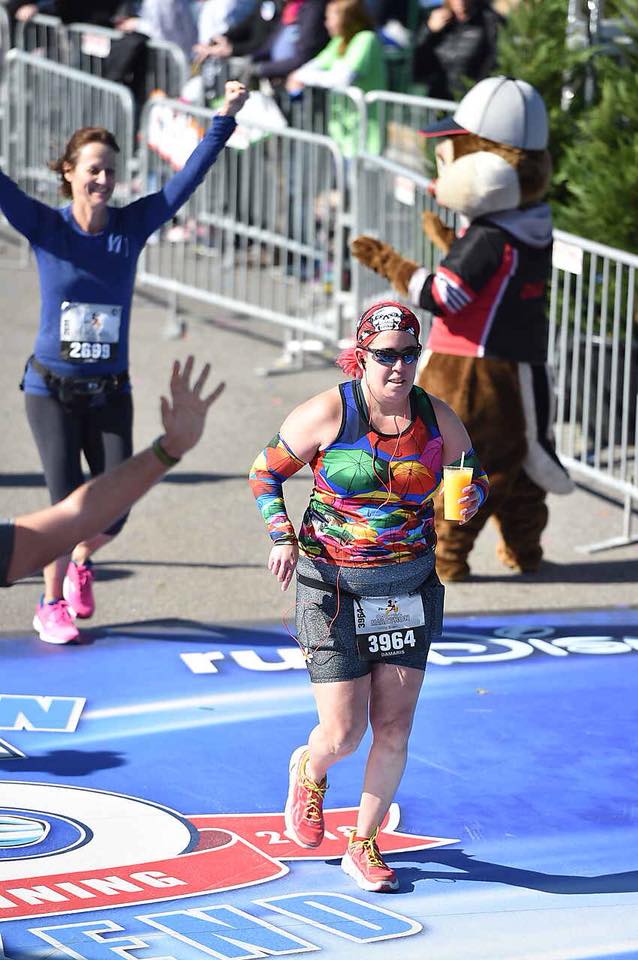 I so wanted to race this race to see what I could do, and as you can see from the splits, I started doing it, but it was not meant to be.  I heard I wasn't the only one ill during or after the race.  Many others have mentioned they had similar issues.  Still wondering what I ate or what happened, but meh, not worrying about it anymore.  5:09:14 is still one of my fastest post surgery races, so I guess it didn't go that bad after all. :)