October 10, 2018
On Sunday, I ran the Chicago Marathon, the marathon that was to be my 50th lifetime marathon and the last one for this year.  However, since I had to DNFd the East Canyon Marathon in Utah, due to breathing issues caused by the high altitude, Chicago ended up being my 49th.

After Utah, I started back with speedwork and some faster workouts rather than the hill workouts I was doing in the last few months. The change of pace was welcomed and it was a bit of fun.  I ran some 5K intervals that gave me hope that if I ever go crazy and want to race another 5K, that I could get back close to my PR pace.  But like Jack Sparrow says:

I've been having some bad headaches, and a couple of extra migraines in the last few months, which I'd attributed to the high blood pressure (I'm back on the meds, thanks genes!), but it ended up being that my 20+ year old root canal is failing and I need to either fix it or extract the tooth and do an implant.  On top of that, one of its roots was infected, which was causing a lot of ear and head pain.  It still does, but not as often thanks to the antibiotics I had to take until the night before the marathon.  Between that, the blood pressure, and what came after, I am not surprised I didn't have much in me to try for this race, except lots of fun.

We arrived in Chicago on Saturday at noon, as usual, and headed straight to Yolk for a bit of brunch.  Yolk is amazing and they have opened more of their restaurants around town, which makes us happy (the lines are always long so more Yolks make that better).  My husband, who was here but not running ate like he was the one running the marathon, while I had their Mac & Cheese: 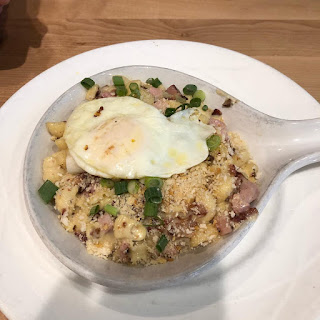 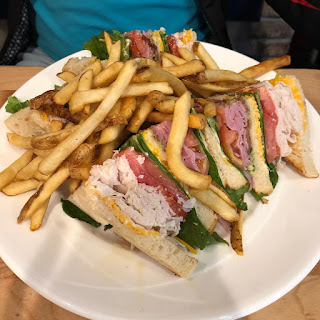 Overall, once again, one of the best meals in town.

After brunch, we headed to the expo, where I was set to meet a fellow forumite from RWOL, Runny Babbit.  As we got off the bus, we try to catch up the light which still had around 10 seconds to cross and my foot got caught on a street grille.  The bad leg, of course, doh.  Immediately, I went like this:

And ouch.  Both my groin and the bad knee were immediately sore.  I entered the convention center limping.  Yay me.

I did meet Runny Babbit and we have PROOF: 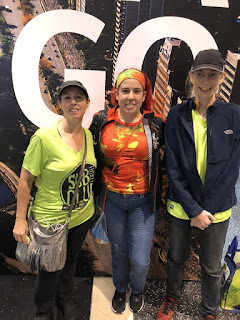 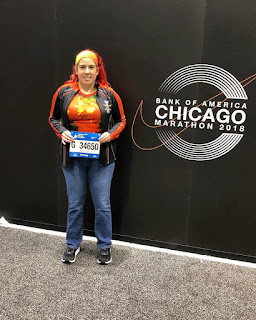 By the time we got back to the hotel, I was still limping but less so.  Then my husband told me he had a horrid cold, while coughing all over me.  Bless his heart!!!

Woke up 300 times throughout the night, to sirens, honking, non-stop.  I wonder if I was back in PR, it reminded me so much of it. But alas, slept a bit from 4am to 6:30am and got ready.  One of the advantages of staying right across the street from the start and finish at the Congress Plaza, is being able to sleep through 7am and then head to the start, but as usual, I hardly slept but I felt OK.

I got ready and picked my KK donuts from the fridge, only to realize they were FROZEN.  I try very hard to eat one donut, but the most I could do was a tiny piece before I quit.  Oh, well.  I should have known how the day was going to go just by that.  At least I still had my Mtn Dew!

Headed to the corrals at around 7:30am (Wave 2 starts at 8am so I had lots of time).  Tried to meet a friend from my INKnBURN Alumni group but we were unable to get together this time. Waahhh.

Met my local running friends in our corral and took some pictures:

It was around 60F and cloudy, and it was not supposed to get any warmer than 62-63F throughout the race.  Although that is still too warm for marathons, it was probably the best Chicago Marathon weather in the last five years, so I'll take it. 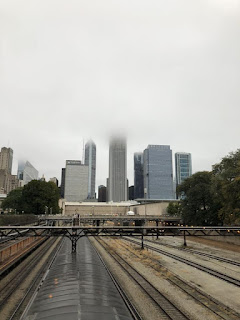 At this point, my groin was quiet but I had not tried running yet.  My knee was achy but no more than normal, so I was hopeful.  I was also stupid to think so, lol.

And we were off! I love this race and have been able to run it in the last six years (my first Chicago was a DNF due to a ruptured cyst). The city really comes out for this 26.2 party and I've never realized how cool is this party until Sunday.  The first few miles went North through downtown, which means the GPS watches do not work.  I tried to keep an easy effort and when I finally checked my pace (after Mile 5 when things calm down), I was actually going at my easy pace.  However, by Mile 5, my groin and knee were not happy.  I decided to continue until they either calm the fuck down or get worse.  That lasted until around Mile 9.

The rain started as Wave 2 was to start and it didn't let up for the first 17 miles or so.  My feet were soaked and I had to stop often to clean the debris coming into my shoes and socks since I used no show socks this time.

Once I realized I didn't have a fast race in me (probably not even an easy one) due to the pain, I decided to join the party through the next 17 miles.  And party we did.  I crossed the half at around 2:26 and it only got slow from there. I was fine with that. 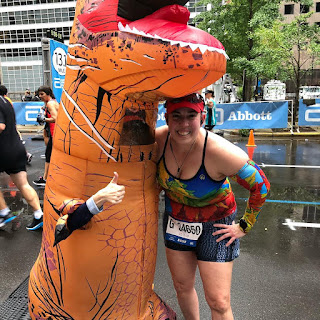 I also met so many INKnBURN Alumni, our local Run 1000 Miles Club, and RA friends along the way!  I never get to see many folks while running, but this time I was looking for peeps and I found them! 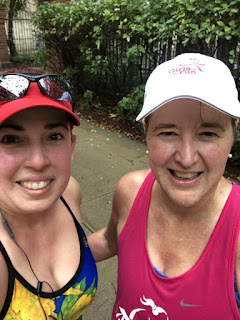 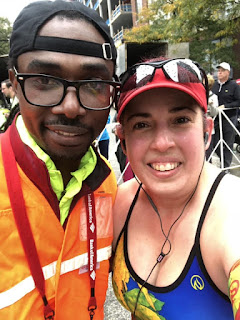 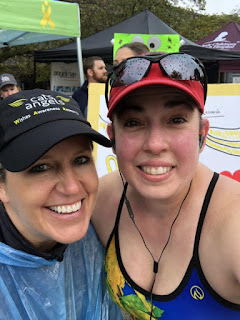 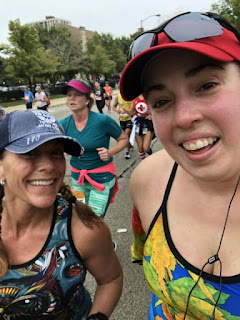 Pilsen and Chinatown had competing parties.  Not sure who won it but both were amazing: 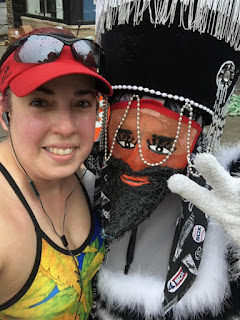 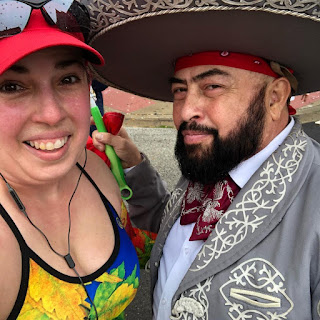 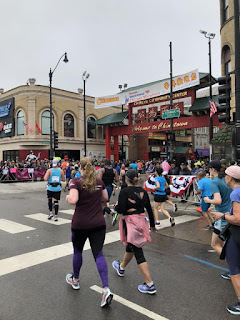 Then, I finally saw beer on the course!  It only took 23 miles! 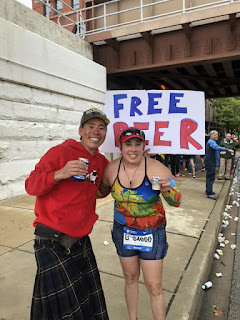 There are lots of Puerto Ricans in Chicago and there has never been a race where I have not seen my "bonita bandera".  Found it after Mile 23: 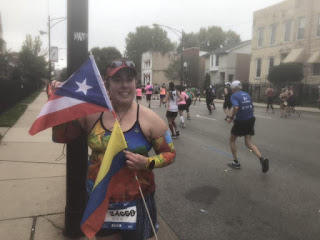 And with less than a mile to go, I finally got to eat something: 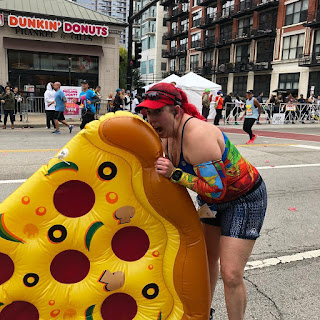 Man, running a marathon without any KK donuts sure took it's toll!

I finally headed to the finish line with sadness that the party was over for me.  But the volunteers and the parties were still going strong for the many corrals and waves behind me.  This city sure knows how to party!

And done!  5:35:05, not even my slowest Chicago.  I've never had a good Chicago Marathon race, between the DNF, the heat, the asthma, etc.  So it was nice to just have fun on this course and really enjoy the city. 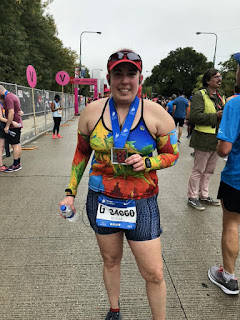 And with the fifth Chicago finish, I earned Legacy and guaranteed entry for 2019.  I can't wait.