February 28, 2019
It's been a while since I have posted something in this blog.  Since the Chicago Marathon in October, WTF!  I was super busy at the end of the year, between training for Houston, work, the shutdown (I was excepted and had to work through the longest shutdown in US history), a virus that stayed with me for the first five weeks of 2019 and caused my running to come to a halt, and life.  Of course, I DNFd the Houston Marathon for the third time in a row, sigh.  I was so sick I couldn't even run for 1/4 mile without stopping to breathe or just to, you know, live.  January, 2019 really sucked.  Maybe Dallas might be a better choice next time?

At least 2018 ended on a great note with almost 2500 miles run for the year.  Then January came and knocked me off my ass, ha.  Oh, and my TM broke in December and I was without one for five weeks as well (we had to buy a new one even and it took three weeks to get to us).  It's a miracle I was able to run as much (or as little, depending on how you look at it) as I did.  But on to the rest of the year.

I had been looking forward to this race weekend, as it would be a chance to spend time with my BFF Mary and her daughter, relax from all things work-related, and just have some fun.  I was concerned about my ability to run both races, as I barely ran in January and I was having issues with my breathing as early as the beginning of February.  But things improved quickly once the virus died (better him than me, right?), and I did some good MLRs that showed me the HM was good to go.  I had to defer the Myrtle Beach Marathon until 2020 because I didn't feel ready to tackle a marathon (even after all the training I did up to December 31) due to the virus, but now I am feeling great.  I think this is the longest I have been without running a marathon, as my last one was the Chicago Marathon in early October!!!! Gah.

The plans called for me to drive to Orlando on Thursday afternoon so I could meet Mary and K for dinner in Epcot.  Traffic was miraculously nice and I got there just in time to enjoy some drinking around the world before dinner: 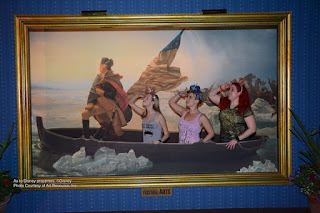 As luck would have it, our friend Katrina was in the park, visiting from UT!  We quickly tried to meet and we managed even though Mary and K were exhausted from the 3am wake up to fly to Orlando.  Mission accomplished: 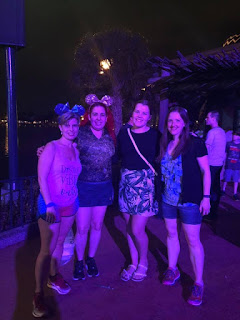 The weekend has started!

Our plans for Friday was to go to have breakfast, go to the expo early, and head to Animal Kingdom for some fun. We had some fast passes ready and the one I was looking forward to was the one for Avatar: Flight of Passage.  I've been unable to go on that ride due to the large queues and lack of fast passes, so I'm glad Mary was able to get us FPs for it!

The expo was great as usual, and since we didn't run the 5K, the expo was quieter than it was the day before. 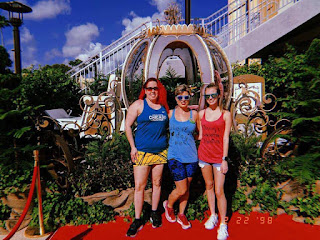 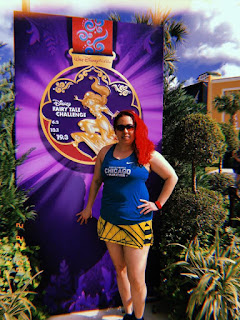 We went through things pretty quickly.  Saw my friend Beth, 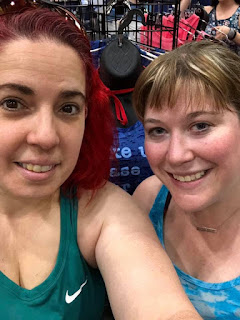 bought a couple of things at the expo (Pandora charms, etc.) and we were off to Animal Kingdom.  It's so much faster when you have a car and can drive between parks instead of taking Disney transportation and, since I had driven, we were all set.

We had some fun at AK and we had lunch at Yak & Yeti like last time.  It is a great restaurant but, of course, special snowflake Damaris has to have a special chef making her meal so she does not die from shellfish contamination.  But Disney is awesome and accommodates any dietary and allergy concerns and today was no exception.  Some pics from AK: 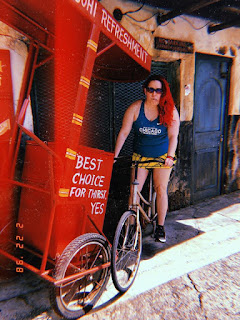 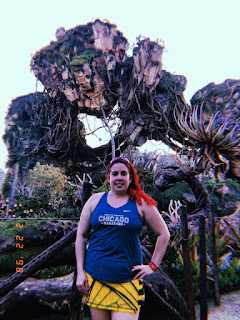 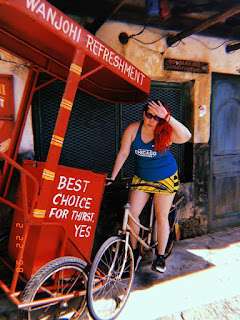 We rode Everest twice but I don't recall seeing any of the rides pictures or didn't like them or something as I don't have them.  I finally got to experience Avatar and I now understand the 1-3 hour queues: it is most likely the best 3D ride I've ever experienced; better than Harry Potter, Transformers, and anything Disney or Universal Studios have ever done.  You must try it.

After AK, we headed back to Epcot and rode some rides until the park closed.  This delayed us a bit since the exit from the parking lot took forever.  We were exhausted and it was late (10pm late).  We got to the room and ordered a pizza while we got ready for the 2:30am wake up the next day.  We ate quickly and everybody went to bed.  Except me. I didn't sleep a wink.  It was one of those days where I cannot relax enough to sleep.  Of all the days!

At 2:30am we start getting up for the race and you can tell I didn't sleep as my eyes are not even open here: 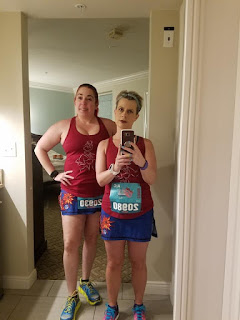 The plan was for K to race the 10K while Mary and I would get character pics and have a great time.  The Princess for the 10K was Mulan so we had a nice Mulan tank and our INKnBURN Ryu skirts.  I seriously didn't think I could run fast after my virus, but the first 3.5 miles were all between 9:30 and 10:15mm, so yay me.

Some pics from the race: 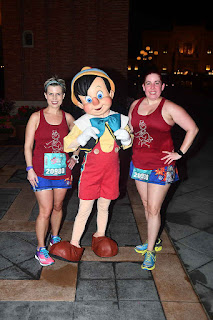 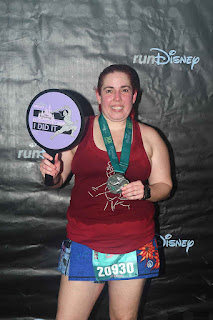 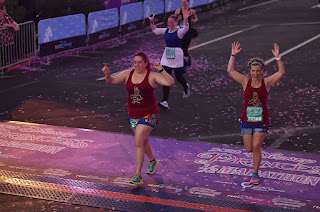 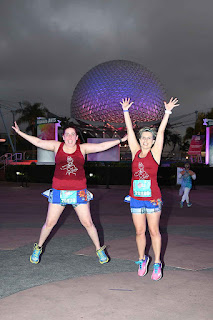 We obviously had a great time, finished at around 1:14 with 4-5 character stops and finished before sunrise.  Yay.

Since we all finished earlier than anticipated, we had some nap time before our breakfast at Whispering Canyon Cafe.  Love that place as they always have this giant breakfast tray with all the trimmings and that's what we got.  I managed to sleep around an hour, at least, good enough for the rest of the day.

After breakfast, we headed to Hollywood Studios where we had some fast passes as well, including the Star Wars Tours and the new Toy Story Land.  Our plans were to be done by 6pm, do a quick dinner, and then head to the hotel and sleep early.  We headed to the pool at the hotel (and the hot tub) for some quick relaxation, ordered dinner by the pool and by 9:30pm we were in bed.  I actually slept this time!

On Sunday, our 2:30am wake up came by too quickly, lol.  The plan was to run the Half Marathon together and give K a nice experience, since it was her first half.  My foot and the heel issue I had at the end of the year resurfaced for some reason after all the park walking so my foot was achy.  Later in the race, it kept falling asleep.  I think it was a bit swollen and the shoe and sock were constricting it.  I wish I had taken off my sock to help it but my tired mind didn't think of that then.

Since I was having issues with the foot at the end of the race and K was ready to finish, she and Mary went ahead and I ran the last 1.5 miles solo.  The foot behaved a bit towards the end (after the overpasses were over, which were somehow irritating the foot) and I finished strong.

Some pics of our HM adventure: 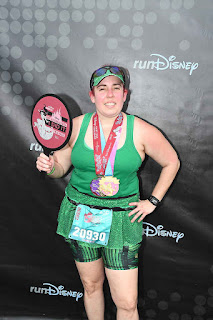 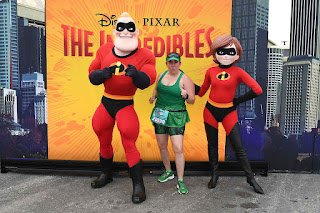 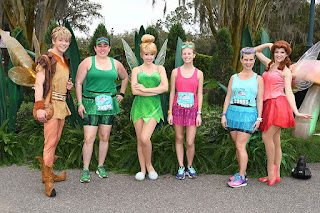 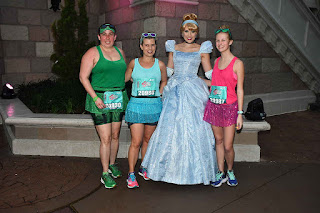 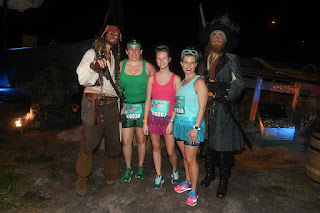 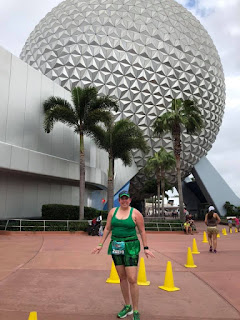 K did great on her first half marathon and she will do many more. :)

This weekend was a blast.  We had been planning this for a year and I am so happy the time came for us to enjoy some time with each other again.  With food, drinks, and a little bit of running of course.

On to the next one!