I registered for this race because it's literally one mile from my house and a smaller event that the more popular Drumstick Dash in Indianapolis.  For one, it was nice not to have to wake up early and drive 20+ minutes to run a 5K with 20,000 other people. Second, the one mile to and from the house would serve as a warmup and cooldown.  So, between these two races, this one won and likely to win every Thanksgiving from now on.

The race is put out by a local runner who is also in my Fisher Running Club.  It is a well-organized race and it had enough porta-potties, food, water/Gatorade for the runners and walkers and it was also walker and pet friendly.  I really liked the event.

My last turkey trot was 5 years ago, one of the last times Miami wasn't 80F on Thanksgiving Day.  Initially, I wanted to run it for fun, but my coach recommended I raced it if the conditions were good.  At this point, I'm super slow. Slower than I've been in years, and the idea of racing something that I had no chance of PRing or pacing well wasn't my idea of fun.  I have not done much speedwork outside in probably 4 years so this should be a good attempt at crashing and burning and seeing what I was made of.  What I got out from the event is that I'm no woman of steel, but I'm no longer made of butter. :)

The forecast for this race was horrible.  Initially, we had wind warnings that fortunately moved to Wednesday instead, with gusts from 44-60mph throughout the day. The idea was for me to run 5 miles the night before the race but with those winds, I took my second RD and had two days off instead.  I don't like not running for two days as it makes my legs feel like lead the next time I run, and today was no exception.  But what can you do.  I didn't want to run on the treadmill since I have the opportunity of running those five miles tomorrow, especially since I have been on the treadmill for close to four years.

When I went to bed last night, hubby lost his cellphone and I had to get up and help him find it.  I finally fell asleep at 1am and woke up at 6:40am to get ready.  Temps were 32F with 9mph winds and a windchill of 25F.  Initially I was going to wear a skirt (32F is skirt/shorts weather for me) but since I'm was running to the race and wouldn't have my car available to get warm until the race, I opted for capris.  I wore an INKnBURN pullover and after Mile 2 I regretted it a bit but with the wind, I wasn't too warm during the race.  I ate one Krispy Kreme donut and my Mtn Dew and headed out to the race at 7:30am.

Once I got there I was happy when I saw my running club tent there, which meant I could take shelter from the wind and cold while we waited to start.  We took a group picture and headed to the start at 7:55am. 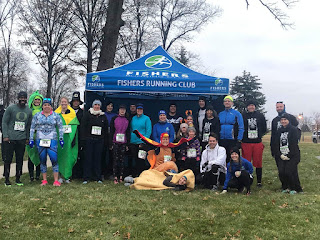 And we are off!  The course takes us to one of the main roads and parts of my normal running routes, Olio Road. However, I try not to run Olio Road because the area near me is one big running hill and yeap, that was the first mile, mostly a slight uphill.  Of course, I started out too fast for the incline and finished the first mile at 9:20mm.  I didn't really have a goal in mind but 9:20mm is technically my HM pace and it was frustrating to see how slow I've become but whatever, I pushed.  Unfortunately, I'm not used to the inclines here after running on the treadmill for so long and in Miami which has an elevation of ZERO.

Mile 2 had us turn right towards the West and to another rolling hill on route back to the finish.  I started fading through this uphill until I finished mile 2 at 10:20mm or thereabouts.  Ay, ay, ay.  Anyway, we turn right again and into the wind and here is where my legs say, we are done, hello?  Normally at this point I mentally quit and, although I quit a bit and stopped pushing to a faster pace, my goal was to keep the pace I had and hoping for a sub-30 minutes.  At some point during Mile 3, I realized that would be impossible.

Mile 3 has us turn North for a bit before a hairpin turn to head back in the direction of my house and then back to the West to get back to the start and finish.  At this point, my legs have nothing else to give but I keep telling them to shut up.  I started this mile at 11:40mm and ended up with a 10:30mm so at some point, the legs listened.

As we head to the finish I put the last song in my playlist and I start getting pumped.  Apparently I had some speed left because I finished that last run to the finish at 9:10mm.  And I was done in 30:48.  Disappointing for someone with a PR of 24:02 and slower than I have run in forever.  But after my Vitamin D deficiency and lower endurance and training, this is a good bottom for me to work on.  I also have not done short races in forever, being that the Miami weather has been brutal for years. So it should be fun to try to beat this time a few weeks from now if the weather is not too hideous around Christmas time. 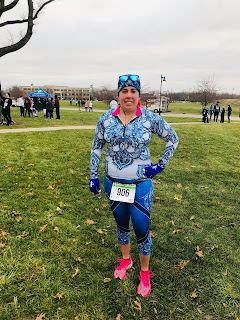 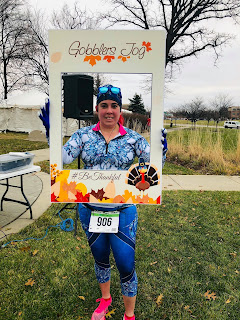