March 25, 2020
I wasn't going to write this RR until my next Shamrock race was done, but then the coronavirus pandemic happened and I didn't even get to run any of my next races nor write this RR.

This was my first St. Patrick's Day race in a few years and my first in Indianapolis. A lot of people from my running group were doing it so I signed up assuming I would get to run my LR on my Friday off and had one day off in between to recover. Plan was to treat it like a race or at least to treat it as speedwork. Neither happened, lol.

On Friday, when I woke up, we were under a wind and storm warnings, with gusts in the 40s. I had 18 miles to run and I could've run them on the TM or outside, but instead, I decided to change them to Saturday and then treat the race as a fun race. I was bummed because I wanted to race it and see if my PR was soft (I still think it is), but also I didn't want to run 18 miles on the TM if I didn't have to.

So, with tired and sore legs, I got to the race and met my fellow FRC peeps. We hung out in our team tent as it was cold and windy and stayed there until the start.

My plan was to run by feel. What feel I had no idea. Not sure what I was thinking going out like it was a race or a speedwork session but yeap, I did it.

I remember the first mile feeling hard but nothing too bad. It had a bit of an uphill before we got to the riverwalk but nothing too bad (and Fishers has substantial hills - rolling and otherwise - that I take daily so I was well prepared. But my legs were tired. I was wondering if the first mile would even be 11mm. It was actually 10:50mm. At this point, I regretted wearing a second layer under my outfit.

At that point I was thinking, oh, I have not worn these Shamrock shoes for two years, I don't recall if they bunched my socks or not. Maybe I should have thought of this before I put them on this morning, no? At that point, my sock was bunching badly and I didn't want to stop to fix it, but by the end of the mile I had to. It slowed my mile down to 11:22mm but whatever. It was fixed.

Mile 3 had us getting back down the other side of the river and heading back. At this point, I realized the mile markers were short but not sure how short they would be until the end. I decided to push as hard as my sore legs would let it without regret but after 18 miles the day before, the legs didn't have much more to give. Mile: 11:13mm.

The last mile was hard, it was against the wind and also towards the sun. So I was both happy with my second layer and sweating if that makes sense. I so wanted to walk as my legs were tired or to slow down, but since I wanted to race, I kept it going as hard as I could. The last mile was 9:21 but the race was short by at least 0.10, so I assume this mile was similar to the previous two miles.

Total time was 42:35; almost a minute per mile slower than my one and only 4 miler a few years ago but I felt good with that result since I never even expected to even run that fast after the 18 miler and it was good to get out there and race something, knowing the races after this one would probably be canceled. As I write this, four of my races have already been canceled or postponed, including my marathon. Now I wish I had not run the 18 miler and raced the 4 miler to see how fast I was, ha. But anyway, it will be OK. There will be many other races in my new location here in the Midwest.

Some pictures of the race: 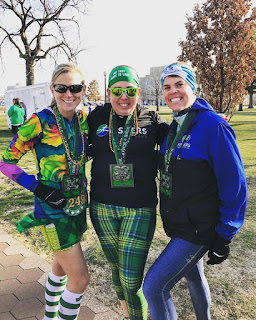 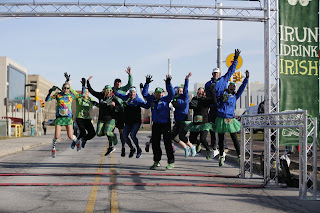 This was a great race, with a great medal and pre and post-race goodies. I will definitely run this race again.