Showing posts from 2014
Show all

Space Coast Marathon RR: A Huge Course PR, a Huge Side Stitch, and a great fun was had! (Long)

Today, I ran the Space Coast Marathon in Cocoa, Florida.  We are doing this race five years in a row to get some humongous medal at the end.  It is also a small but fun race that has a great 7 hour time limit for the full, free food, and free all you can drink beer (which only my husband enjoys because by the time I am done, I am DONE!) At the beginning of this year, I wanted this race to be my goal race for the year.  Then, I got into Chicago and thought I could use Chicago as a gauge and then treat this one as the goal for the year to see how fast I was then after surgery and the whole shitload of asthma I had for most of the year.  Unfortunately, there were several events that prevented me from reaching that goal (although I did attempt it nonetheless). First, as you all know (or at least the Dailies knew), I had to DNF the New York City Marathon due to an asthma attack at Mile 8.  The 40mph gusts of wind, the debris, and the horrid weather that day turned my allergy to dus
1 comment
Read more 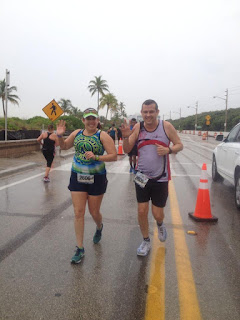 Today, I paced hubby at the Michelob Ultra 13.1 Ft. Lauderdale.  This was not the race we were supposed to do this weekend.  We had paid and had all our reservations made for the Wine & Dine Half Marathon in Orlando, FL, late last night.  We woke up and got ready and started up the Turnpike.  Suddenly, due to work, we were unable to make it down to Orlando.  As we headed back home thinking of all the cancellations I needed to make (hotel, friends we were meeting, etc.), I told him, since you are missing the race, you won't make the 12 HMs in 12 months unless we sign you up for another race.  Then, I realized one of our local half marathons was today.  Bingo!  I registered us at the store, picked the packets up, and went back home.  Although we were a bit sad we couldn't make it to Disney after all the expense, part of me was glad we did not.  The race had 90% of showers all throughout (it rained a lot) with high chance for thunderstorms and the race started at 10pm. We wer
Post a Comment
Read more

Short Version: Yesterday, I ran the Chicago Marathon with a time of 4:46:49, my fastest in close to two years (and you know I have run lots of marathons in two years) and my fourth fastest marathon ever.  Considering how this year has gone with my surgery, recovery, rebuilding, and my asthma, I am very happy with this result. Long Ass Version: As most of you know, this race was a race I needed to do since I had to DNFd last year at Mile 11 due to a ruptured cyst, which ended up with a total hysterectomy in February of this year.  Last year, I was much faster (and skinnier) and I was training very well on high mileage and amazing paces.  But it was not meant to be.  It was all over before the two hour mark back then.  I did 5-6 marathons between Chicago and the end of 2013, but all were painful and slow, dealing with my issue in the best way I could.  The last marathon I ran was Disney in January and, after that, I DNFd two races and felt just ready to have my surgery.  All
Post a Comment
Read more

Hubby wanted to run all the Disney races this year (although we are not going to be able to do the new ones) so I signed us both to do the ToT 10 miler.  My plan was to run this as my first 10 miler and hit a certain time, but that was before I accidentally registered for Chicago.  So, before my Coach had a heart attack, I told him I would run this with hubby in his corral (Corral E) instead of mine (Corral C) a week before Chicago. I like the Disney races.  I don't like or go to Disney World often (if at all) but their races are well organized and the medals are cool, so I do the marathon every year (the Goofy Challenge, but who is counting).  But, since hubby started running and doing HMs (the I'm never running longer than a 10K, ooh, a HM, dude!), I registered us for Disneyland, ToT, Wine & Dine, and of course, Goofy.  Kill me now; that's too much Disney spirit even for me. Anyway, with that being said, I've never done a 10pm race and with me running wit
Post a Comment
Read more

Mr. Docket and I ran the Michelob Ultra 13.1 Boston yesterday.  This was sort of a last minute trip; we had registered but it all depended on how my husband recovered from the Disneyland Half Marathon two weeks ago (he has never done two half marathon two weeks apart).  He is more than halfway done with his quest for 12 HMs in 12 months for the Half Fanatics and has already gotten his second moon for doing the 6 in 6.  He felt pretty good in between and did a good recovery/mileage during the two week period, so he is happy. In my case, I am training for Chicago and this was supposed to be a tough MP workout.  Specifically, I had to do 2 easy, 8 @ MP, 3 progressive (or as fast as I could).  Since training has been going OK, but this week's HMP workout went horribly, I was a bit nervous of attempting 8 @ MP after traveling the morning prior and being dehydrated.  I wish I had known this would not be the case. Like I said, training has been going OK, but I have been running e
Post a Comment
Read more

Chicago Marathon Training Week 4 and the Disneyland Half Marathon RR

This has been a weird cutback week for me.  I spent most of the week with severe asthma, three horrible runs and a trip to LA to run the Disneyland Half Marathon.  I was supposed to run this one as a progressive run, per coach's order, but since my husband was crying and lamenting I was not running his first Disney race with him, and he protested every chance he got, my coach switched my LR last week to add some MP miles and then I was told to go run this with my husband. This is his first Disney race and he was very excited.  He ended up a tad disappointed, but I made sure he understood that the delays in this race and the lack of organization and slightly boring course were not typical of the Disney Half Marathon he is doing in January.  We had fun, but we had issues during this race that I have never had during the Disney races down here. This is his 6th half marathon in six months.  Not sure where he got this idea of doing multiple races to increase his ranking on the
Post a Comment
Read more

August 26, 2014
I was very excited to start this week of training because it would be my first 50 mile week in a few weeks (it's been a while since I have felt good enough to run that much).  Last week I finally felt strong enough to train hard and was looking forward to the two quality workouts I had this week. The first two workouts were done on the treadmill, mostly because Miami has been having a heat wave for the last few months and the last few weeks have suffered from heat indexes in the 100s all day long, so I knew running outside every day was dangerous.  Unfortunately, the treadmill gait made my knee swell a bit so I moved my rest day to Wednesday to rest for my first quality workout of the week, the Thursday MLR (Medium Long Run for the non-runners).  This was to be 10 miles with the middle 6 progressive (each mile faster than the last).  I ran before I start working (I work from home on Thursdays) and even then, the heat index was above 90F.  But fortunately, the sun was covered i
Post a Comment
Read more
More posts