Showing posts from November, 2010
Show all

Tapering Brings Me Another PR - But Still Short of My Goal

November 25, 2010
Wow, I cannot believe it's Winter. This race was HOT and HUMID in all caps. 75-80F and 83% humidity. Short: Old PR: 1:01:24 (from last month) Course PR: 1:02:08 Goal: 59:59 NEW PR: 1:00:20  Long: I did this race last year and as usual is chaotic, hot, humid, and rainy. The only thing it was not this year was rainy. As all of you know, I've been searching for that sub-1 hour 10K for a year now and I've come to believe it won't happen unless I move somewhere cold. We only have around 3-4 10Ks around here and they are all in warm weather (even the ones in November and December). But today, I wanted to give my all and see what happened. Pre-Race: Last night I tried a new pasta. I wanted to try something new to see whether it would work for my marathon pre-race dinner next week. I am so tired of the same pasta for 18 weeks! Anyway, went to bed at midnight because DH wanted to watch a movie. Slept around 4.5 hours. My neighbor was
1 comment
Read more

Week 2 of Tapering Brought the Madness!

November 23, 2010
Ugh, I've done two runs this week and I can barely keep up. They were a 6 and a 5 miler but my legs feel just dead. Nothing much more to say. Is this tapering madness?
1 comment
Read more

November 18, 2010
Tapering continues and it's already driving me nuts. I did 6 miles yesterday. 6!!!!!! I have not done sick in months (except during my sickness days). I added weights and core because I felt like such a slacker. Today I did my long run since I won't be able to run it on Sunday as usual. 12 awesome miles in 2:15. That's the fastest I've run long runs this season. I'm sore though and because I won't be able to run Friday through Sunday, I'm supposed to do 6 tomorrow morning. Help!
2 comments
Read more

November 16, 2010
I'm tapering for my first full! I'm already freaking out and it's not even race day. I had a 7 miles tonight and they felt so.....short. Is that normal? At least work has been awfully hectic so I've had no time to think that marathon day is less than 3 weeks away. And two days after my best half marathon, I ran a 7 miler at faster than pace and the miles felt too easy to worry. I think my training is finally coming together. The one that is falling apart is me, LOL.
1 comment
Read more

Revenge Was at Hand 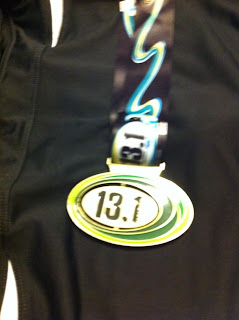 Today I ran my 6th half marathon and I PR'd by 2 minutes (exactly). This half marathon has a special place in my heart because it was my first half marathon (last year). It's a well organized race, small (somewhere around 4000 I think) and with great crowd participation. I had planned to run this one as an MP run but since I DNF'd my PR seeking half two weeks ago due to illness (as you all know), I wanted to race this one to see how well I could do under the circumstances. Weather: The cold snap left on Tuesday and I've been running at 80F again. The temps started dropping just a tad yesterday and the forecast was 61F with 87% humidity. Fortunately, the forecast changed to 64 with 80% humidity, which I thought was much better. I finished the half at 75F. Those 10 degrees cost me some time in the second half. Pre-Race: I am training for my first marathon so I only took one rest day as taper. This week was not as bad as the previous ones, running onl
1 comment
Read more

One Bad Run Immediately Followed by My Best 8 Miler

November 11, 2010
Yesterday, I had a scheduled 9 miler run. I've done 9, 10, and 11 milers for the last 3 weeks so I was not concerned at all. Unfortunately, I spent all day on my feet, in heels, in court, sometimes even running from court to court. So, my legs were already tired. I also put the KTTape too loose so as soon as I started running everything hurt from the ankle to the thighs. I had aches in my calves, ankles, shins, everything. Wow. After finishing the 4th mile at my slowest pace in weeks, I decided to cut it short. My worst 4 miler ever most likely. Fast forward to today. I put my KTTape (which became loose during the run, ugh), and I went out with no expectations for an easy 8 miler. This was supposed to be a speedwork session but since I've done no speedwork in 4-6 weeks due to illness, ankle, illness again, etc., I was not going to do mile repeats. But, I ran as my body felt like. First mile was off pace but way faster than the day before. Second mile was already s
Post a Comment
Read more

4 Weeks Til My First Marathon!

November 09, 2010
I cannot believe there's only 4 weeks left. I'm about to start tapering! I'm starting to panic. I was sore from my 20 miler, mostly because I ran this long run at 30 seconds faster than my previous ones. But it was finally cool and I was actually running on pace. But the legs felt it. So for today's run I was not sure how fast or slow I would be since I still had some soreness. But after I warmed up (legs take 2-3 miles to warm up), the run was my usual negative split run. I only did the last two miles at sub 11mm, but hey, I just ran 20 miles on Sunday, don't expect too much.
Post a Comment
Read more

Last 20 Miler: Where I Have Been and Where I'm Headed

November 07, 2010
Today, I ran my last 20 miler before my first marathon. The temps were nice (53-64F) during the run and I ran on pace (and solidly on pace), but I still ended up as exhausted as my 86F 20 milers. This has been my peak week and I ran three 10 milers back to back so I'm sure exhaustion from the training program had something to do with it. I started feeling low on energy by Mile 12 and started getting slower by then. My hip started bothering me too (some issue with the groin I am getting when I run 50 mpw+), but other than that it was a very nice run. Which made me think about my road from just a casual runner to soon to be marathoner. I started running sometime in 1999 and just casually as a warmup for my real workouts. I was never able to run more than 1 mile and that was pushing it. I only ran on the TM. Fast forward to 2001. When I started working full time AND finishing my MBA at night, that's when I had almost no time for exercise. I had some cardio/weights video
1 comment
Read more

November 05, 2010
Boy, am I sore or what. Back to back 10 milers 3 days in a row. And what 10 milers. I can do them now like they're just 5 milers. Time flies by quickly, I enjoy my runs. It's like it's supposed to be. And we have a cold front so it's my first run in 64F of this season. Last 20 miler coming on Sunday. Temps should be nice. I hope I can run on pace. I've done 1 long run at pace. Darn Summer. I'm seriously considering not doing a Fall/Winter full marathon. But I know myself; I'll do it all over again.
Post a Comment
Read more

November 04, 2010
Today I had a scheduled 10 miler (again). I felt fine during the day although I think I could have eaten more snacks than I actually did. It was raining and the humidity was at 76%. Lower than yesterday but still. I ran better than yesterday. I used KtTape again and the run was painless. I may run without the tape tomorrow and see how the ankle feels.
2 comments
Read more

Back to My Loving Self

November 03, 2010
I have not posted in quite a few days. I had a very eventful weekend. First, I twisted my ankle as I mentioned before and I had been dealing with that. I thought I would be able to run the half marathon without the brace and I was running low mileage but strong. Then, on Thursday night I went to bed with a sore throat. By Friday evening I had a fever. For some reason, stupid me thought I could run the half marathon and on pace. It was raining, it was humid, it was horrible. When I started walking at mile 4, I decided to DNF. So I did. I went back home (wet) and laid in bed for the next two days. I slept and slept and slept and finally yesterday, I felt fine. What I learned from that experience is not to run when you're sick, hehe. Today was my first run since then. The schedule said 10 miles but I wanted to see whether I was strong enough to run at least 5. I tried the KT Tape on my ankle (achilles is still sore, sheesh) and it worked wonders. At mile 5 I had a gel
Post a Comment
Read more
More posts